By Every Family’s Got One Guest Writer — Heather Osterman-Davis 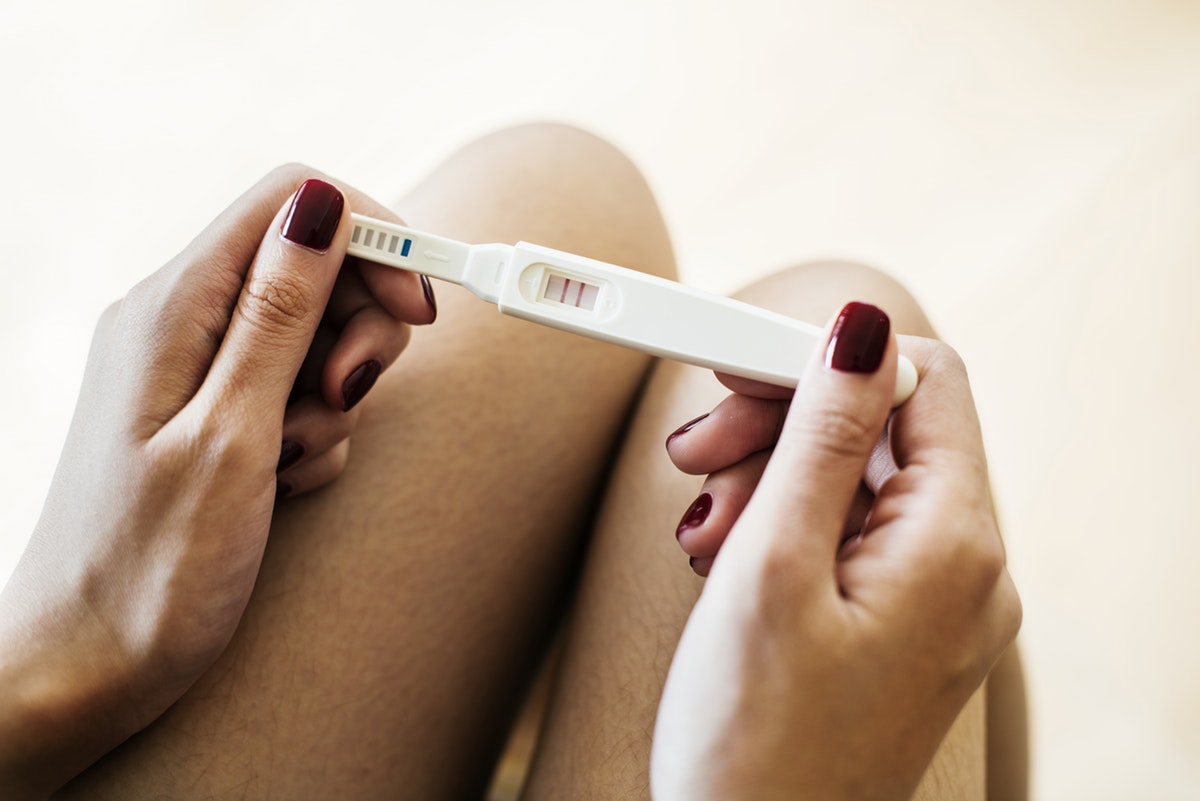 Ethan, just shy of 2, is thrilled to be on a plane. Outside of that, he has no idea why this trip is such a big deal. He doesn’t yet know that our family is complicated or worry about ownership and identity the way his father and I do. To him the world is simple: love, hugs, and magic.

This isn’t a vacation. We’re racing to get to Odessa, Texas, before Jeannie, my friend Eddie’s mother, dies. Jeannie is genetically Ethan’s grandmother, though until now we’ve been reluctant to consider her one. Her dying wish is to meet Ethan.

My husband, Doug, is transgender, so when we wanted to have kids, we couldn’t do it on our own. Not being able to genetically father our child was painful for Doug, like nature’s middle finger, saying, “No matter how you change your body, it will never be enough.

There will always be another man out there whose DNA runs through your child’s blood.”

That would’ve been the case even if we’d used an anonymous sperm donor, and we wanted our child to be able to know the person who gave him the other half of his DNA, even if it complicated things.

After tremendous thought, we asked my good friend Eddie to be our donor. While Eddie, aka Poppy, would be a part of the child’s life, he would have no legal obligations or rights, and Doug would be the only father. Eddie’s family could meet the child someday…

but they wouldn’t really be grandparents.

The week Eddie came to New York to help us get pregnant, his mother had her uterus removed in an attempt to fight cancer, one uterus put into use while another was decommissioned. I was 37; Jeannie was 55. When Ethan was born nine months later, Eddie was the first person Doug called, whispering, “He’s here, he’s here,” into the phone. Across the country, Eddie wept.

The first time Eddie met Ethan, Eddie held him in his arms as his husband, Louis, looked on. “He’s amazing,” Eddie said, as Doug and I nodded. It was electric to all be in the same room looking at a human being we had created in such a unique, beautiful way. Outside the room, the situation was harder to define. When people found out we used a sperm donor, they often asked…

It took everything in me not to scream, “Doug, Doug is the real father!” Oftentimes it was easier not to tell, not to have to justify.

When Ethan was 18 months old, I got pregnant again, this time using Louis’ sperm. Louis became Pippy, someone special but also not a father. Deep in the cave of my body, cells divided and grew, cells that would become a heart and lungs and bones, and eventually a little girl. And down in Texas, an angry cellular division once more began ravaging Eddie’s mom’s body, with an opposite and tragic prognosis.

Jeannie was given a year to live and decided she really wanted to meet Ethan before she died. Doug had never completely lost the fear that if…

Eddie’s family met Ethan, they would attempt to lay claim to him.

But when Eddie asked, Doug instantly agreed. Ten years earlier, Doug’s brother had found their mother dead in bed. She was only 53. Doug resonates with her loss. Sometimes, in bed, he curls into me and sighs, “She would have been a wonderful grandmother. She would have loved Ethan so much.”

We had just begun tossing around some dates when everything in Jeannie’s body seemed to shut down at once. Eddie called to say he and Louis were flying down to Texas that weekend to say goodbye, but he didn’t know if there was any point in us coming, if she’d even be conscious when we got there. For us, there was no option but to try.

Now on the plane, Doug’s anxiety is palpable.

In his worst-case imaginings, I will die and Eddie’s family will decide to come after Ethan. This is unlikely for a thousand reasons, but sometimes I think the fear of losing what we treasure most is woven into our DNA as much as the color of our skin, hair, or eyes.

“I just imagine them all staring at me and thinking he’s not my son, that he belongs to Eddie, to them,” Doug says.

I move Ethan from the window and place him in Doug’s lap. Ethan’s body immediately shifts to meet the contours of Doug’s. “He knows you’re his father; that’s what matters,” I say.

“There’s no way they could ever take him from you.”

“There’s always a way,” Doug sighs, resting his head on my shoulder. Ethan reaches out for my hand and for a moment, all three of our bodies connect.

When we finally land, Eddie and Louis are waiting at the curb.

“Welcome to Lubbock,” Louis says, stretching out his hands to display a flat empty land.

Eddie lifts Ethan into a hug. “Hi Ethan,” Eddie says, his face crinkling into a map of happiness, “Do you remember Poppy?” Ethan may or may not remember him, but he’s delighted by Eddie’s delight.

The drive from Lubbock to Oddessa is roughly 140 miles.

Oil derricks line the highway like sentries, arms pumping up and down. Others stand motionless as if waiting for someone to give them permission to take off.  I’m in the front with Eddie; Doug and Louis are in the back with Ethan. Ethan’s screaming in his car seat, begging us to take him out. I roll down the window and stick out my head, letting the rush of wind mute his shrieks. The air smells like we’re driving through an enormous gas station.

When we reach the outskirts of Odessa, the flat blue sky is dotted with wispy white clouds that look like exhaled desolation. Louis takes pictures out of the car window of quirky signs and buildings on their last breaths. Through his screen, things become achingly beautiful but inescapably sad.

When we finally arrive at the entrance to Jeannie’s hospital room, we pause. “It might be shocking,” Eddie says.

Doug and I weren’t sure if we should prep Ethan. He has no “before” to compare her to, but there will be so many tubes and machines. I desperately want him to be in top form, but creating the meeting of a lifetime is a lot to put on a not-yet-2-year-old.

Inside, I realize I’m the one who needed preparation. I last saw Jeannie at Eddie and Louis’ wedding. She was radiant in a yellow sleeveless dress, her blond hair falling in a thick bob. Now her skin is desiccated to the point of crinkled paper, her short hair faded to a dull gray, her skeletal body disappearing into the sheets.

When Jeannie sees Ethan, her eyes brighten and she struggles to muster alertness. After an exuberant greeting, I stand by the bed like a misplaced statue while Doug eases into the chair next to her bed, pulling Ethan onto his lap. “This is Grandma,” Doug says, handing over the honorific without hesitation, as if it hadn’t been a submerged seed of anxiety for years.

“Nana,” she corrects us, her voice unimaginably soft. “I’m Nana.”

How can we be family when we don’t even know her preferred name?

Other relatives arrive. They smile and thank us for coming, touch our hands and our shoulders, stare at Ethan, who is a mirror image of Eddie’s baby pictures. After a while, overwhelmed, we head out for the day.

At a red light on the way to Eddie’s uncle’s house, where we’ll spend the night, Eddie says to the windshield, “I think my mom was waiting until she met Ethan to die.”

I press my fingers to his forearm but don’t say anything.

When we get to the house, Eddie’s aunt shows us to our room, which includes a full-size crib with an ornate wooden back. Eddie had said they were going to borrow a crib from a neighbor, but I was picturing something small and portable; this is heirloom quality. Looking at the doorframe, I realize they must have had to assemble it right here.

“It wasn’t a big deal,” his aunt says, shooing my question away with her fingers. Doug and I give each other a look. It feels like a big deal.

The next morning, we head back for a final visit. Doug and Ethan take their now-familiar place in the chair next to Jeannie’s bed. A large heart-shaped balloon floats above Jeannie. She pulls it down to cover her face and starts playing peekaboo with Ethan. “Where’s Nana?” she asks from behind a Mylar curtain before pulling the balloon away to reveal her smiling face saying, “Here I am,” her voice almost a whisper. Ethan erupts into a long cackle, leaning toward her and then away in delight. They repeat this again and again and again.

Louis walks over to the bathroom, takes off his black-framed glasses, covers his face, and sobs silently. Eddie goes to him, and they slip into each other. Louis lost his mother to cancer years ago. I imagine he’s crying for her, for Jeannie, and of course for Eddie.

How do you pick the right last moment to see someone alive? I walk over to Jeannie and kiss her paper cheek, trying not to dislodge any tubes. Then, I pause. Our salutations are so ingrained—“See you soon,” “Look forward to the next time”—but what do you say when you both know it’s a lie?

I settle on, “It was so good to see you,” but the words are thick and grainy on my tongue.

Ethan says, “Bye, Nana,” before running back into Doug’s arms.

The five of us walk out into the hallway. I barely make it around the corner before I start to sob. Louis, dabbing at his still-watery eyes, says, “This was a good thing you guys did. It was really kind.”

I don’t feel kind. I feel sad. But underneath the sadness is a sweetness; a feeling that this experience has somehow made us…

more of a family than creating children together had.

Jeannie dies one month later. Two months after that our daughter, Paige, is born. She comes out making eye contact. On the street, strangers stop and comment that she’s an old soul. One day a picture pops into my head of the three grandmothers she’ll never get a chance to meet: Eddie’s mother, Louis’, and Doug’s. This is the picture: They’re sitting around a table, drinking coffee, laughing, and commenting on how wonderful Ethan and Paige are. Someone walking by stops and asks, “Who are you watching?”

In unison they say, “Our grandchildren.”

This essay was originally published on Slate.

Heather Osterman-Davis lives in New York City with her husband and two children where she attempts to balance creative and domestic endeavors. Housework is permanently losing.  Some of her writing may be found in Time; Creative Nonfiction; River Teeth; Tin House; Parent.co; Literary Mama; Tribe; and Brain Child, among others.  You can find her on Twitter @heatherosterman