By Every Family’s Got One Guest Writer — Robyn Chittister 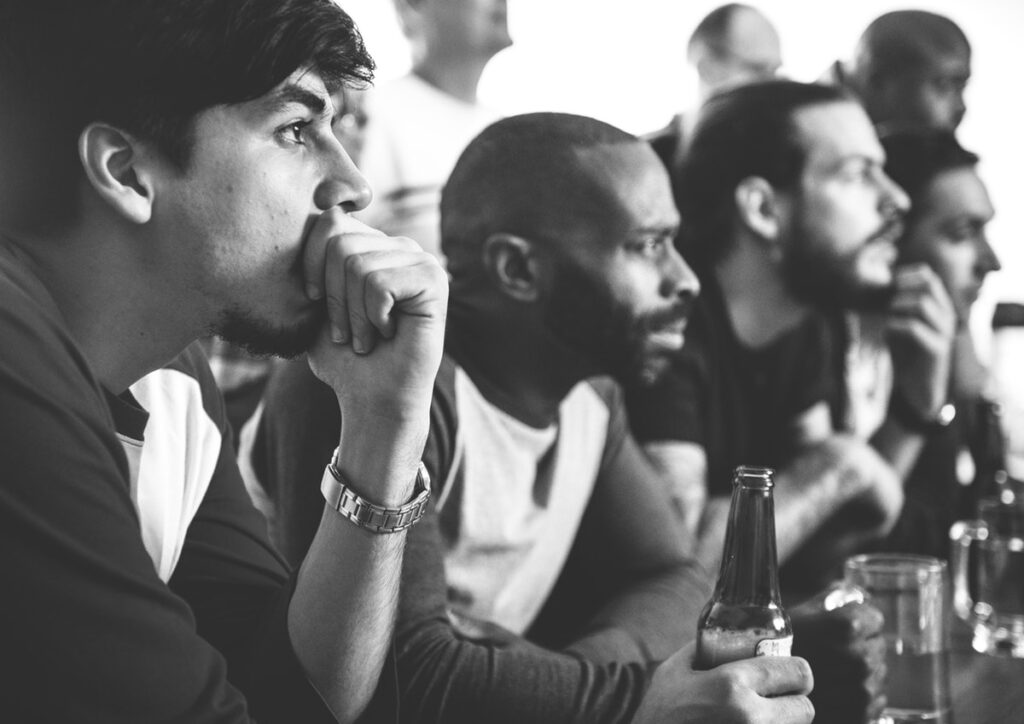 I’m pretty much a girl. Aside from the obvious physical definitions, I like girl things. Scrapbooking. Show tunes. Babies. As a child, I hated recess, preferring instead to read Danielle Steele.

(I was a precocious youth.)

I took tennis lessons, but playing basketball (badly) in junior high, I messed up my knee, to use a technical term, and that was the extent of my sports career. In high school, I was active in literary magazine and Drama club. So, imagine my surprise when I suddenly fell for…

Max, my husband, as you probably know by now, knows everything there is to know about sports. At least, it seems like that to me.

He routinely beats me at Trivial Pursuit. When we play as a team, we kick the other players’ butts. This is not due to our prowess in Science and Nature, but to Max’s domination in the Sports and Leisure category.

Me, I have stock answers…

We go to Nashua Pride games with a group of people from work and Max keeps score. I think he’s the only one who really pays attention, as everyone asks him what just happened.

how to keep score last year. I think he did it just so I’d stop commenting on D.J. Boston’s butt. Consequently, I actually know something about baseball now. I mean, beyond the fact that D.J. Boston has a nice… anyway.

As a child, I would ask my grandfather to explain football to me. He was MVP his senior year of high school, and he’s another…

Then, Max and I had to take a trip to Half Moon Bay from Sunnyvale (both in California, but it’s like driving from Connecticut to New Hampshire). To avoid having to come up with things to say, I asked him…

to explain football to me.

He talked for almost two straight hours, and was on special teams before he asked, “Why do you want to know all this?” Consequently, I don’t know anything about special teams, but football doesn’t seem so boring anymore. (Max and my grandfather also get along famously.)

On one of our first dates, I asked Max to explain the NBA draft. I did this because I like to talk. I babble. I admit it. And I felt like I consistently dominated the conversation.

to feel like I could listen too. He spent the better part of dinner explaining the machinations of various teams. Consequently, I still don’t understand the NBA draft. But Max does, and that’s what’s important here.

It’s taken some adjustment on my part, living with a sports nut.

I think we get about 17 ESPNs.

We do plan events based on what teams are playing. I am abandoned when Max can get the Steelers games on the Internet radio. The first thing I do in the morning is make tea.

The first thing Max does is check his fantasy whatever team. Fantasy baseball. Fantasy football. Fantasy golf. (What is the point of fantasy golf? Even I know if you don’t have Tiger Woods, you’re going to lose.)

Now that Max is a sports reporter…

He now has to understand hockey, lacrosse, and soccer. I hear a lot more about sports, and sportsmanship. Sportsmanship is very big with Max.

It’s a big joke that women complain about being…

I wonder how many women try to learn a little bit about sports. I mean, sure, we went to see the Super Bowl and I spent the whole time looking at my friend Joanne’s wedding pictures, but the few minutes I did see were far more exciting, now that I understand the game a little.

I enjoy the Pride games more now that I’m not just staring at the field wondering what’s going on.

and Leisure questions (unless they’re about Mr. Potatohead) but at least I’ve heard some of the names in the answers.

The point is, broadening one’s horizons is almost always a good thing. And Max is a terrific guy. Now, if I could only convince him of the merits of Meg Ryan movies…

This story was originally published on August 8, 2002 in The Bedford Journal and The Merrimack Journal.

Robyn Chittister is a Woman of Words and a mom to two kids through private, domestic, open, transracial adoption. A former Storyteller for adoption.com, she occasionally blogs at Holding to the Ground.