A Story About a Birthday Party

A Story About a Birthday Party

By Every Family’s Got One Guest Writer — Doreen Oliver 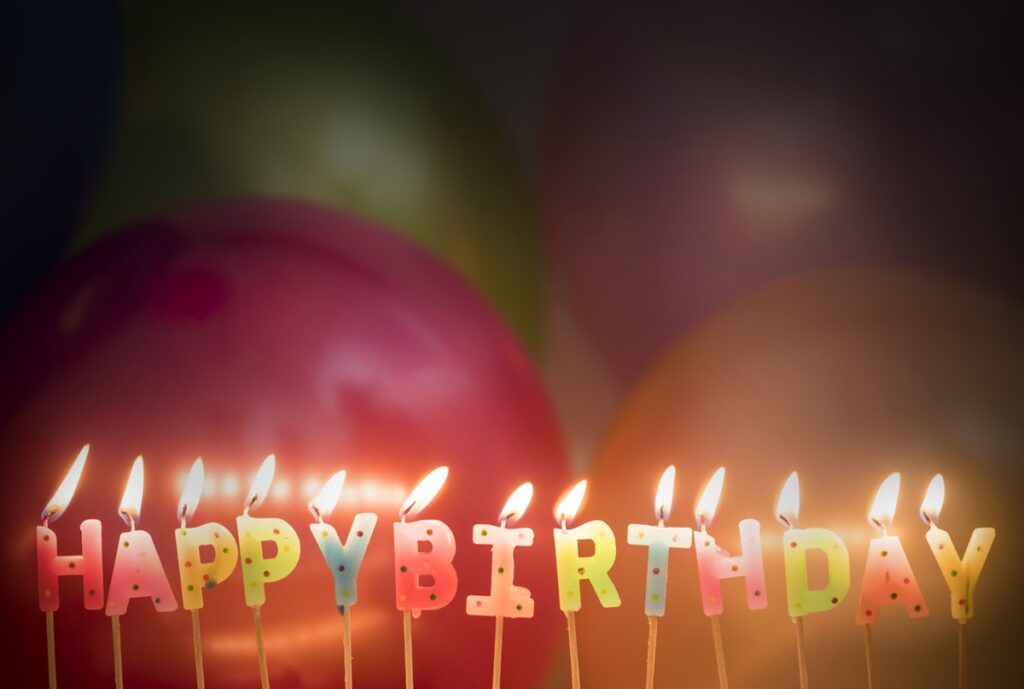 The first time I threw myself a birthday party, my hair caught on fire. I was chatting with a friend in a West Village lounge, unaware burning candles hung centimeters away.

With a slight tilt of my head to sip my lemon drop martini, my hair lit up like four out of the five rings at the Sochi Olympics.

I’d never been one to throw myself a party.

It had always seemed a bit self-indulgent, celebrating yourself when all you did the day you were born was lie there, bawling. But I had felt isolated in the months leading up to that fateful day, and wanted to be fated.

For nearly two years, while my husband went off each day to collaborate with colleagues and clients, I stayed home with my lone co-worker…

I had abandoned my career as a film producer when he was born, and now he and I were new hires in the roles of mother and child, with neither of us doing a very good job.

He had high marks when it came to walking and feeding himself, but wasn’t cutting it in the talking department.

If I were a better supervisor…

scheduling more play dates, labeling aloud each piece of produce in the supermarket, not stashing him in the Aquarium swing during my morning coffee break with The View I would have been able to help him speak.

Instead, Xavier and I were alone together in our Brooklyn apartment, punching the clock. And he hadn’t uttered two words consistently.

another developmental review with New York City’s Early Intervention agency. A few months before they had denied my son free speech therapy services, saying his language was “age appropriate,” but I knew he needed help.

This time, my case manager prepped me for the upcoming review, advising me to push for at least two speech therapy services each week. “You might only get one,” she said, “but at least that’s more than none.”

after probing deeper into how below average our pride and joy was, the agency awarded my son three speech therapy sessions per week and two family training sessions per month. They also recommended he undergo a psychological evaluation.

I closed my eyes and finally allowed myself to exhale. A moment later, my eyes flew open.

Wow, I thought. My son must be really messed up.

had to go on, now more than ever! I needed, no, deserved to celebrate something. After clothing and party accommodations were squared away, I focused on my hair.

Hair had always been where I’d stumbled.

the time when many African-American women declare their allegiance to either permed hair or their natural kinks, I vowed never to chemically straighten my hair again.

For someone who never liked to think about her mane but refused to cut it off, this decision left me to fight with my thick, coarse mass on a daily basis. It brought me great anxiety, and to make life easier I often covered up my God-given locks with braided extensions or the occasional wig.

to display my natural beauty for my birthday, I indulged in a trip to one of the best natural hair care salons in New York. The stylist massaged my scalp with elements like eucalyptus and lavender; she coaxed my curls into lush, even, shiny waves.

surrounded by only adults, I caught up with friends who did things other than cut up their child’s chicken nuggets. Alison quit her job to ski in Crested Butte. Lorelei started a non-profit in Brazil. Athena, my cousin’s friend, focused on me.

“Your son is so cute!” she said. “The picture you sent of him in the bathtub is adorable!”

I’d email pictures every week – him at the playground, eating cake, sleeping. Recently I had taken fewer. Only my husband and I knew how hard it was to get him to look at the camera and smile.

“Do you have any new pictures?”

I nibbled the sugar on the rim of my glass, “I’m so used to toting him around I didn’t even think to bring pictures.”

“Where is he now?” she pressed.

“Huh?” I said, thinking of ways to change the subject.

“Where is your son now?” she shouted over the music. “Who is he with?”

“Oh no” I seized the opportunity to create a diversion and called over to my husband with mock alarm. “Honey! What did we do with Xavier? I thought you had him!”

My husband and Athena…

looked at me, baffled. I, however, laughed hysterically. I had traded my discomfort for amusement, and I leaned back away from Athena and her questions to take a long, satisfied swallow of my drink.

And then I was aflame.

It was quick and without warning…

the low-hanging chandelier caught a strand of my eucalyptus-treated hair and ignited it as if it were the actual leaf.

Athena, a parole officer trained in emergency situations, swatted at the middle of my head, extinguishing everything but the smell of burnt hair. A patch in the middle of my head was seared almost to the scalp, and my formerly beautiful tresses now resembled an overgrown lawn, mowed only in the very center.

after that party, the psychologist diagnosed Xavier with autism, my husband was laid off, and my 35-year-old sister had a stroke. I had tried to run away from my worries about my son, to focus on myself instead of the nagging guilt that I was failing my child.

Instead, I got burned.

That was six years ago.

My husband found a new job, my sister recovered, but sometimes I still wish to run away from motherhood. Xavier was diagnosed early, but at eight years old he still can’t hold a proper conversation. Maybe I’m the problem.

My love for him is great, but also heavy, laden with worry and regret. Perhaps it drags him down, stunting his development. Maybe if I left, we’d both be relieved.

I imagine stepping out of the kitchen while the kids eat their gluten-free ground turkey and kale wraps, slipping out the back door, then tearing down our tree-lined street.

My fantasy stops there…

though, because I have no idea where I would go. I can visualize the escape, but can never picture the destination.

That’s the difference between a fantasy and a dream; a vision borne of sadness rather than joy.

Xavier will be a musician. Recently he recorded himself on playing “Let it Be” on the keyboard. He had taught himself to play the chords by ear in the original key. I don’t know if he’ll ever speak like you or me, but I believe his passion for music will be the path to his success, however, we define it.

When I think about his talent, the accomplishments he’s made in his own time, my love for him is light, buoyant, and joyful.

It is this type of love…

that cements me in place when self-doubt shouts for me to run. I can see my son’s future, and therefore I must stay. I have to be his voice, his advocate.

I have to be his mother.

The patch of hair…

has grown back since, but recently, after an exhausting few weeks of Xavier waking up in the middle of the night and squealing for up to two hours, I cut off all my hair.

It was uneven, the ends were frayed and split, and it was too much to manage. I hated the way it looked and was overwhelmed by the care it needed that I felt I couldn’t give. So, I took the kitchen shears, stood over my bathroom sink and cut it, lock by lock.

I ran my fingers through the short, healthy roots. They were strong and sturdy, and stood firmly in place.

Doreen Oliver is a writer, performer, and speaker whose work illuminates the beauty, heartbreak, and unpredictability of life, often through the lens parenthood. Her critically-acclaimed one-woman show, EVERYTHING IS FINE UNTIL IT’S NOT, debuted at the New York International Fringe Festival and premiered Off-Broadway via the United Solo Festival with five sold-out performances and won the United Solo & Backstage Audience Award. Doreen’s work has also appeared in the New York Times, Washington Post Sunday Magazine, and the 2014 Listen to Your Mother storytelling showcase at Symphony Space in New York City. Follow her at @doreenoliver and at doreenoliver.com.